SecretOwl Posts: 40 Adventurer
August 2017 in Game Development Discussion
In the Discord chat we sometimes stray, but I try to circle it back with "We're Almost on Topic!!!" questions. These questions relate to the discussion we happen to be having, but are re-directed towards EoE. @TheWizard has been kind enough to answer most of them and I wanted to post them here (and keep the thread updated) so that those of us who only check the forums can enjoy as well!

In PvE, will there be zones that are inherently dangerous in and of themselves? For example, in the dirty, dank, nasty swamp, is there a %chance my character gets poisoned each round just for being there?

those are cool ideas yeah, but right now it's a map. you you're not truly "anywhere" until you accept a quest or make a CYOA choice, which are distinct experiences (mostly fights)

answer to the second is "yes"

but we're working on just how

we have affiliations with groups (houses). Are there any plans for a relationship system between players aside from your rival. For example, can you marry someone in the game at some point? Could lead to some interesting politics between houses.

so answer to the first one (which i imagine you could guess) is "holy shnitzel, no we hadn't contemplated that so thanks for sticking it in our heads"

speaking of losing privileges, has a punishment system been discussed for players that cheat and/or break game mechanics?

We have briefly discussed food in the past, but assuming there is a food system would there be any chance of it being bad? Or perhaps a cooking skill where better buffed food is harder to cook but you can raise your skill by cooking lower level food? Super rough idea, just spit balling

right now, we're fiddling with ideas around food and provisions, but i don't have anything to report just yet

and certainly no for the beginning of testing

testing will have pvp/pve combat, character dev and forging to complete the loop

beyond that, we'll layer in features as we head toward other things

other launches that is

How are items you don't want anymore handled? I know for armor/weapons you can melt them down for forge parts. What about food (assuming that will exist) or other items. Can you sell them? Or THROW THEM ON THE GROUND!? Etc.

well currently there are only two categories of items

gear (which you can melt down)

and crafting mats (which you use to, uh-- CRAFT)

but if we include, I'm guessing (don't hold me to it) that they would be part of the Gold economy

Will weather have any effect on characters and battles in the game?

So... can we add things like ribbon or trim to our armors.

So... can we add things like ribbon or trim to our armors.Not unlike trimmed armor in RuneScape.

Like... this armor is black, but I have added teal glitter ribbon to it so it sparkles around the outside.

What I'm really asking is, can I trim a warrior in all pink and name it Strawberry Shortcake?

(I am in no way saying this is a good idea, I just hadn't done a WAoT in a while and it fit )

What kind of healing abilities will there be and/or will we be getting a healer type class at some point down the road. Specifically, if 2v2 or 3v3 happens will we see the "Holy Trinity" show up at some point.

This time pulling from the actual off-topic channel lol. Will there be undead in Embermark? Also just sowing the seeds here, but a Halloween event where there is a plague that spreads through PvP would be amazing.

I'm rustling up an undead concept we did for you @SecretOwl

so answer is yes, but we will, as usual, put a TWIST on it 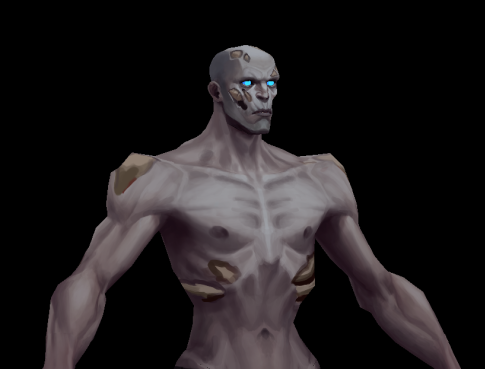 Will there be a small patch of land that my Exile can call his own? A place to mow. A place to rest.

currently the only thing you "own" is your camp

persistent land ownership is a bit beyond our scope for this game, though i did so love it in UO and Star Wars Galaxies

Will we have to maintain our armor. A.K.A. Will armor degrade and require sinking resources into it to keep it working at maximum statage ala Diablo 3?

there is no concept of druability in the game

Even if there is no food system in the game, I would like food to be in the lore for EoE.

Things like that make a world feel more alive to me.

(but you're right ,there's not a food system per se in the game right now)

Is there currently any form of on screen indicator of a level up in EoE? Like a flashy "Level Up" thing?

well currently, it's same thing except it says Rank Up haha

we haven't done a pass on the "tada" yet

Will there be puns hidden in the text of NPC ala Banjo-Kazooie? Will I get some wonderful double entendre?