TheWizard Posts: 838 Wizard
March 2016 edited March 2016 in Game Development Discussion
We haven't revealed too much about the soundtrack other than the occasional tweet, but we recently began work on the Exiles soundtrack with the hugely talented @slivka (who some of you may remember as the composer from a game I worked on a few years back called The Continuum).

We just got to listen to the (in his words) "audio equivalent of a contraption in the process of being built, with wires sticking out, glue dripping, and tape holding things in place." Despite that, here's my and ol' Mike D's @michaeldko reactions (with apologies to our good friend @drakythe, we need to clean up our act): 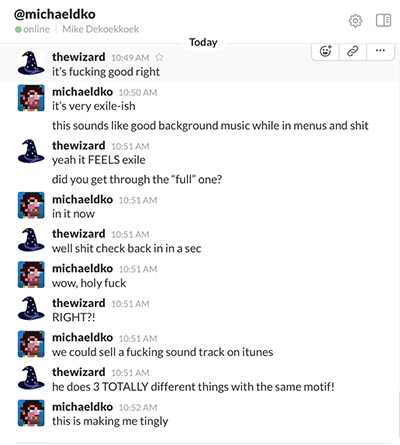 There will be much more on this soon. There's so much magicks in this motif, I can't stand it. Can't wait to share it with you all.

Now help us shape the music-- given what you've seen of the art style, combat and whatnot for Exiles, what are the words that come to mind when you're imagining the game that you would pass along to a composer? Simple things like "adventure" or phrases like "the feeling when exploring a new world" or feelings that the soundtrack should evoke, or whatever you like.